Swamper was absolutely amazing, so this post is going to be really long. We started out on June 11 on Moose Lake and on the first day we paddled through Wind Lake and across Basswood to Norway Island (Really close to where we skied to at Okpik). There we learned the basics of setting up camp, bear bags, cooking etc. Our cooking that night was absolutely amazing. We saved our apples from lunch and made an apple pie. We brought along bannock to make a crust. Apparently bannock is a pre-mixed baking ingredient, with like flour yeast and everything already in it. So we mixed up the bannock with cinnamon, piled on the apples with cider mix, cinnamon, and brown sugar. We baked it by steaming it in a pot. It was a really cool way to cook and the pie turned out amazing.

The second day we finally got off of Basswood Lake and onto some smaller lakes. We went though Sandpit Lake, most of which was literally held up by Beaver dams, and into Tin Can Mike Lake for the night. It was a really nice lake with 40 foot cliffs on one side. We camped right across from the cliffs and got a really cool picture of the sunset (see picture below). That night we had an onion in our dinner. Instead of throwing it in with the rice and chicken, we sliced it up and once again using our awesome cooking skills, we had deep fried onion rings. I never thought that a meal like that would be possible on trail. Also that night we gave fishing a try, and after a few casts, Kevin pulled in a 17 inch walleye (see picture below). 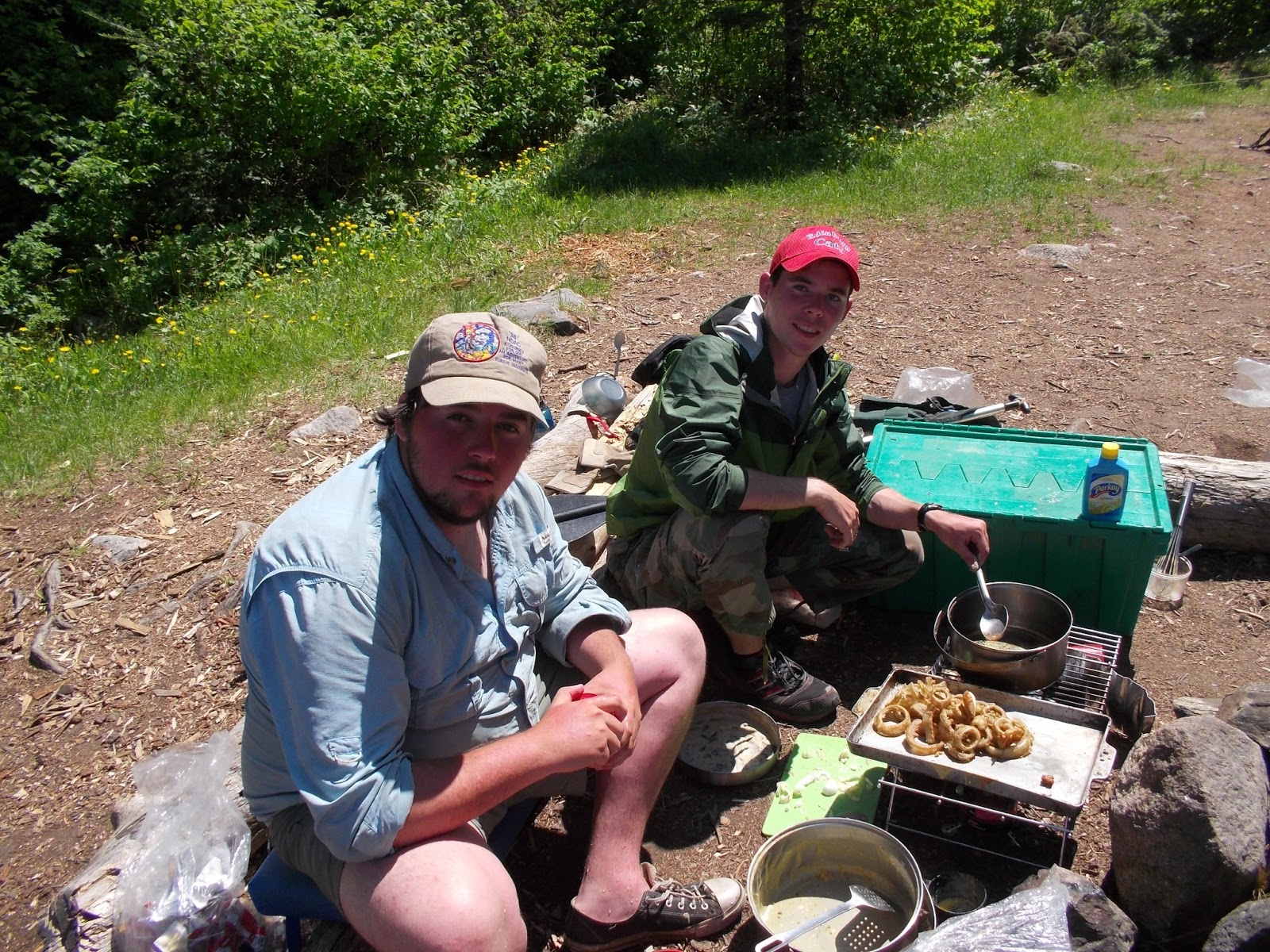 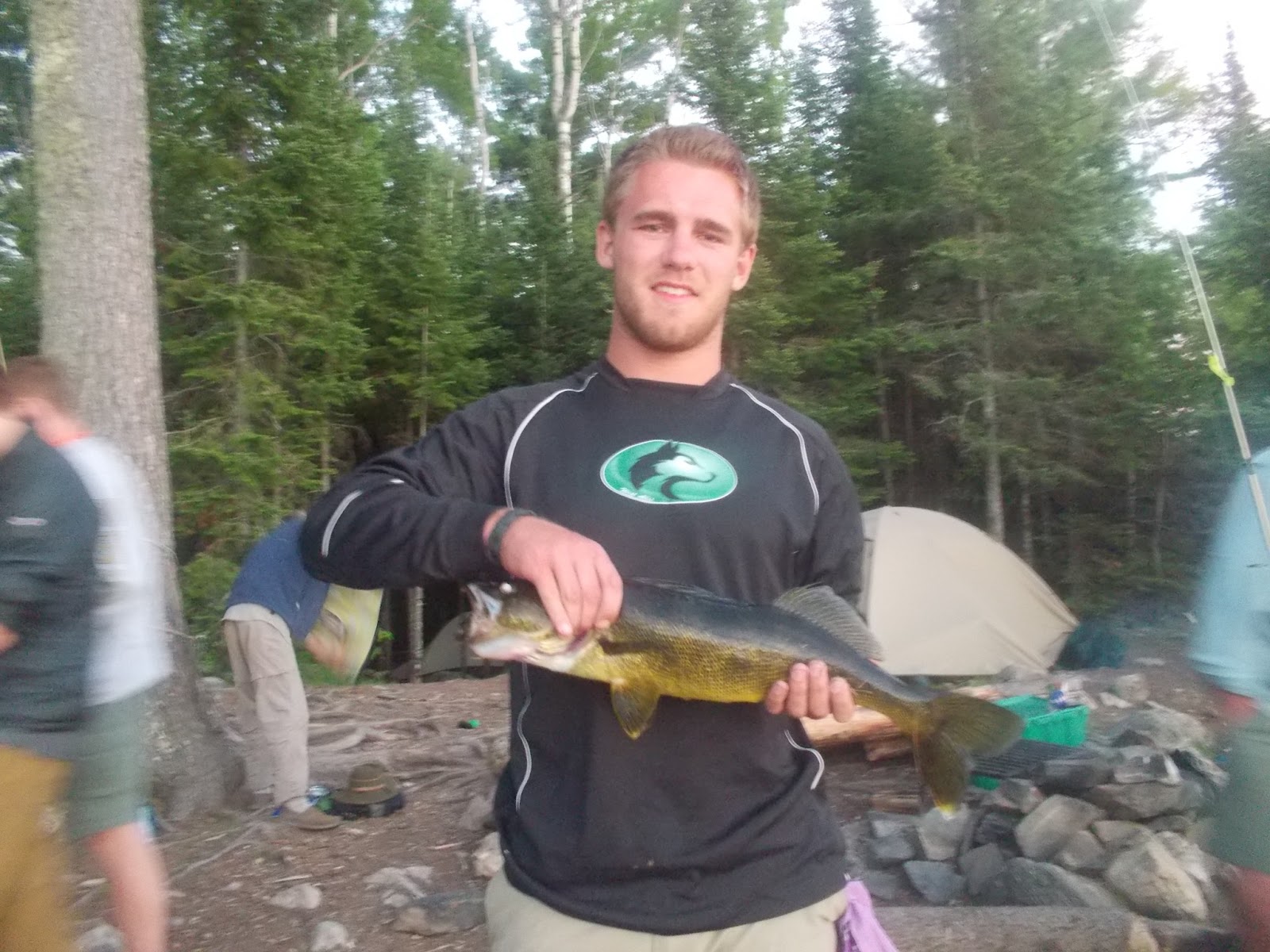 Kevin with his Walleye. 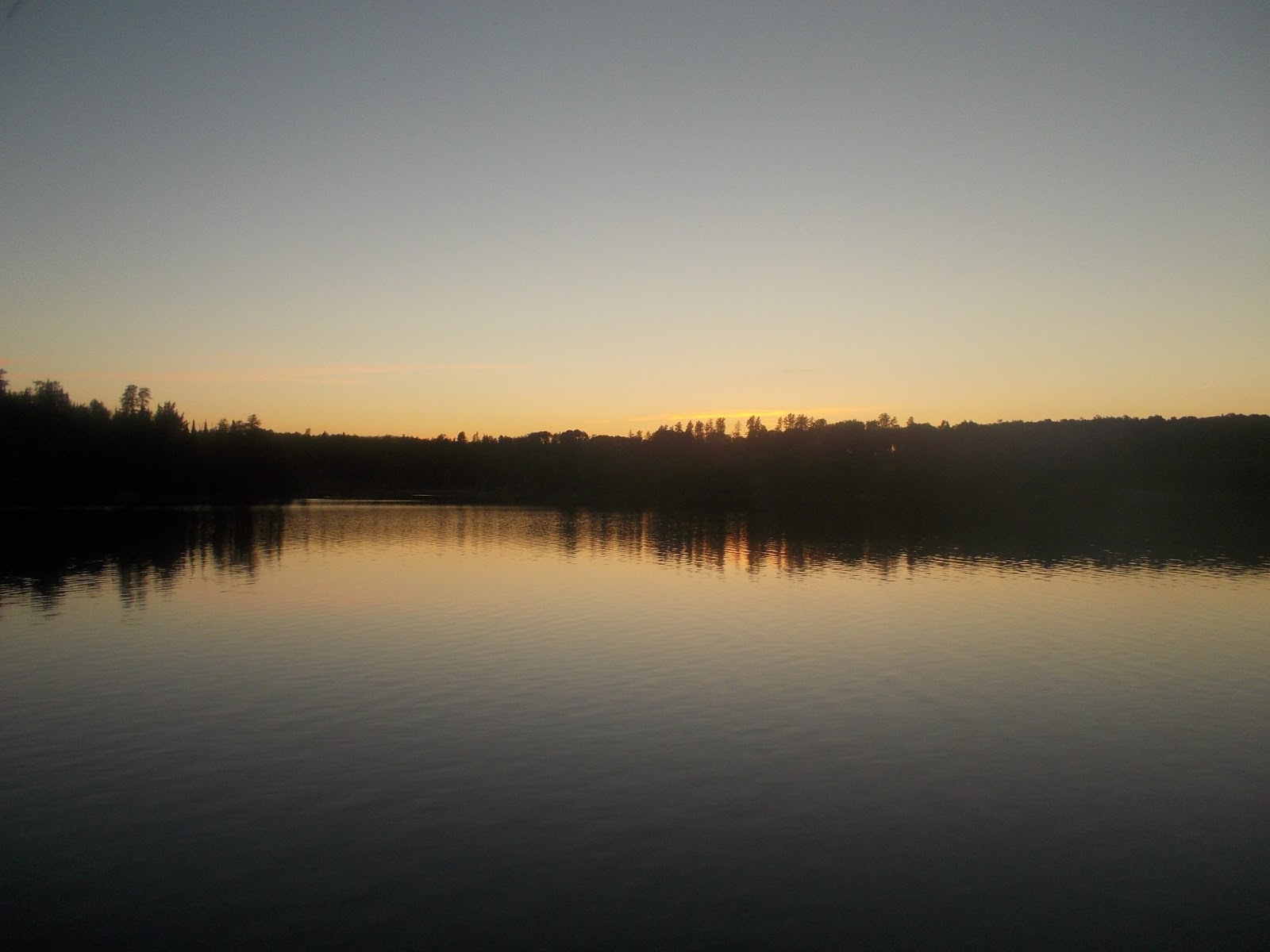 Sunset over Tin Can Mike

The next day was probably the best day of the whole trip. We paddled out of Tin Can Mike onto the lower end of Basswood and got to see Lower Basswood Falls. The Falls were absolutely breathtaking and we got a campsite right next to them with a sweet view of the left side of the falls. We got to camp early so we decided to take a side trip. We went up crooked lake to these huge cliffs to see the native american pictographs. Pictographs are paintings that native Americans put on the rock faces with dyes hundreds of years ago. Unfortunately it is disrespectful to take pictures of the pictographs, so you will just have to imagine how awesome it was. Afterwards we stopped at an island across our campsite to do a little fishing. Unfortunately, all we were able to catch was a tiny little small-mouth bass. Anyways, it was fun and we got an amazing campsite. The best part of the campsite was the bear bag situation. We had 2 huge white pines that we strung our bear bag from. It hung about 25 feet up in the air right between the two trees in the middle of our campsite. Even our brigade leaders agreed that it was the best bear bag we had ever seen. 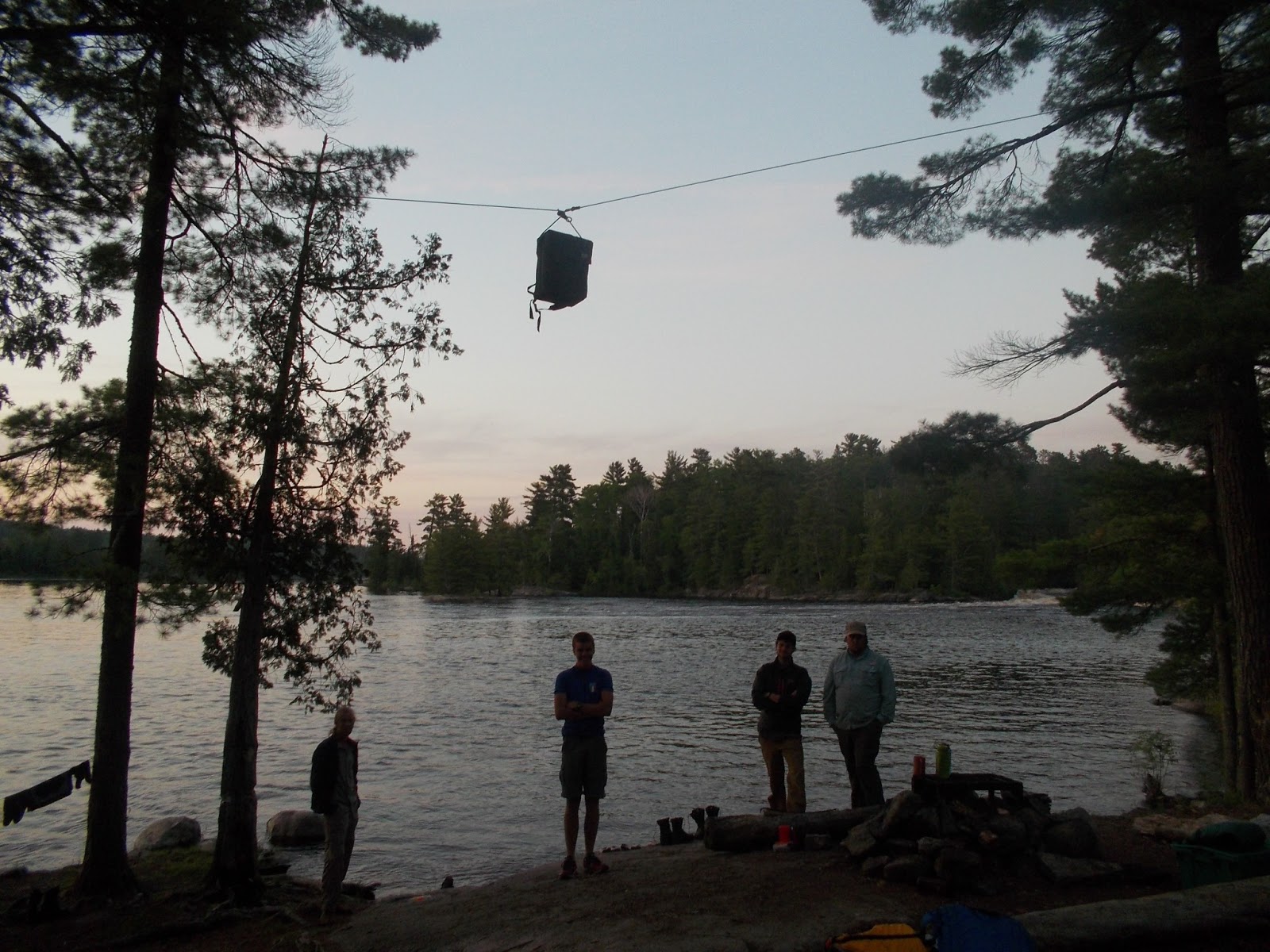 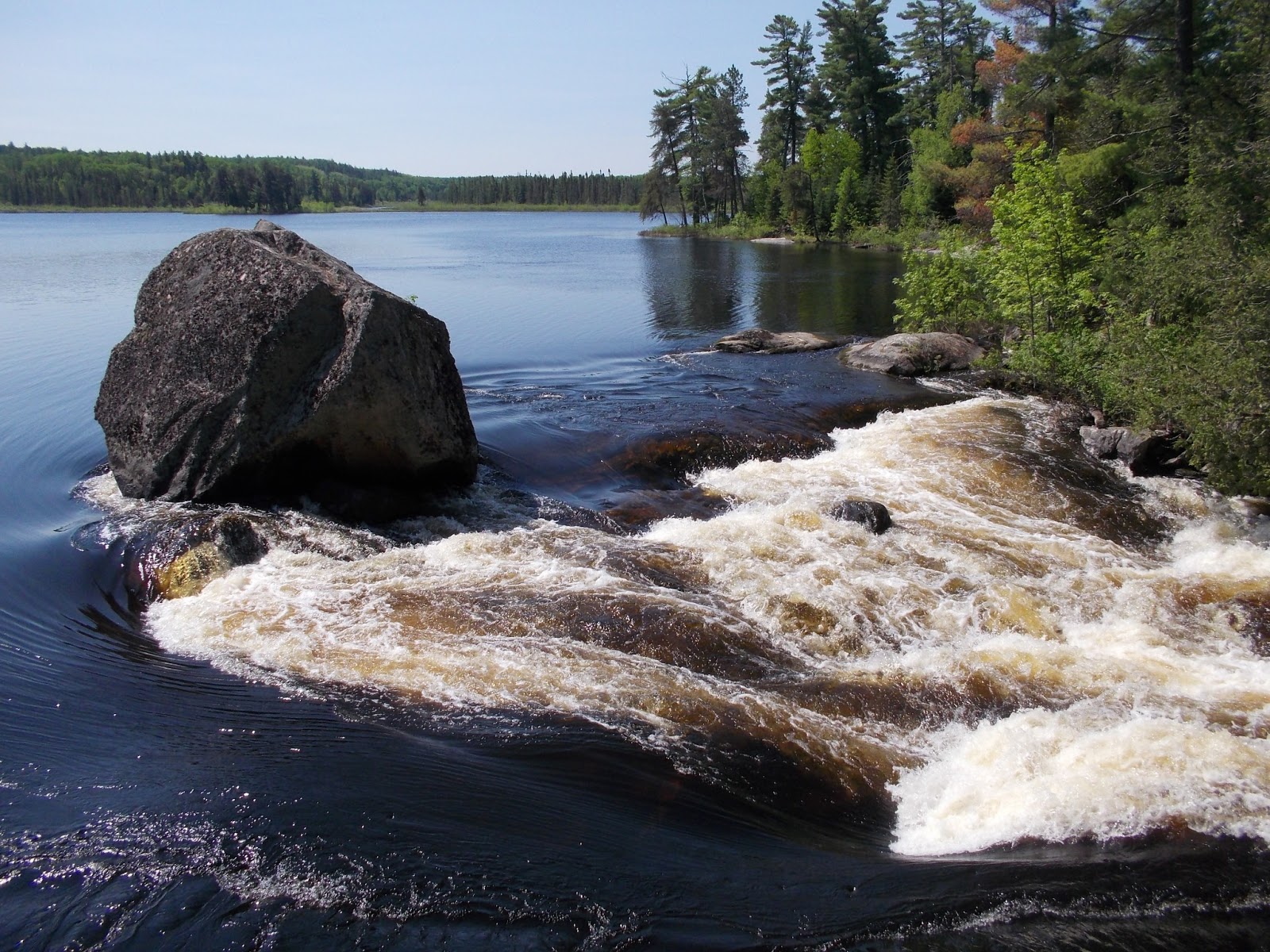 One side of Lower Basswood Falls 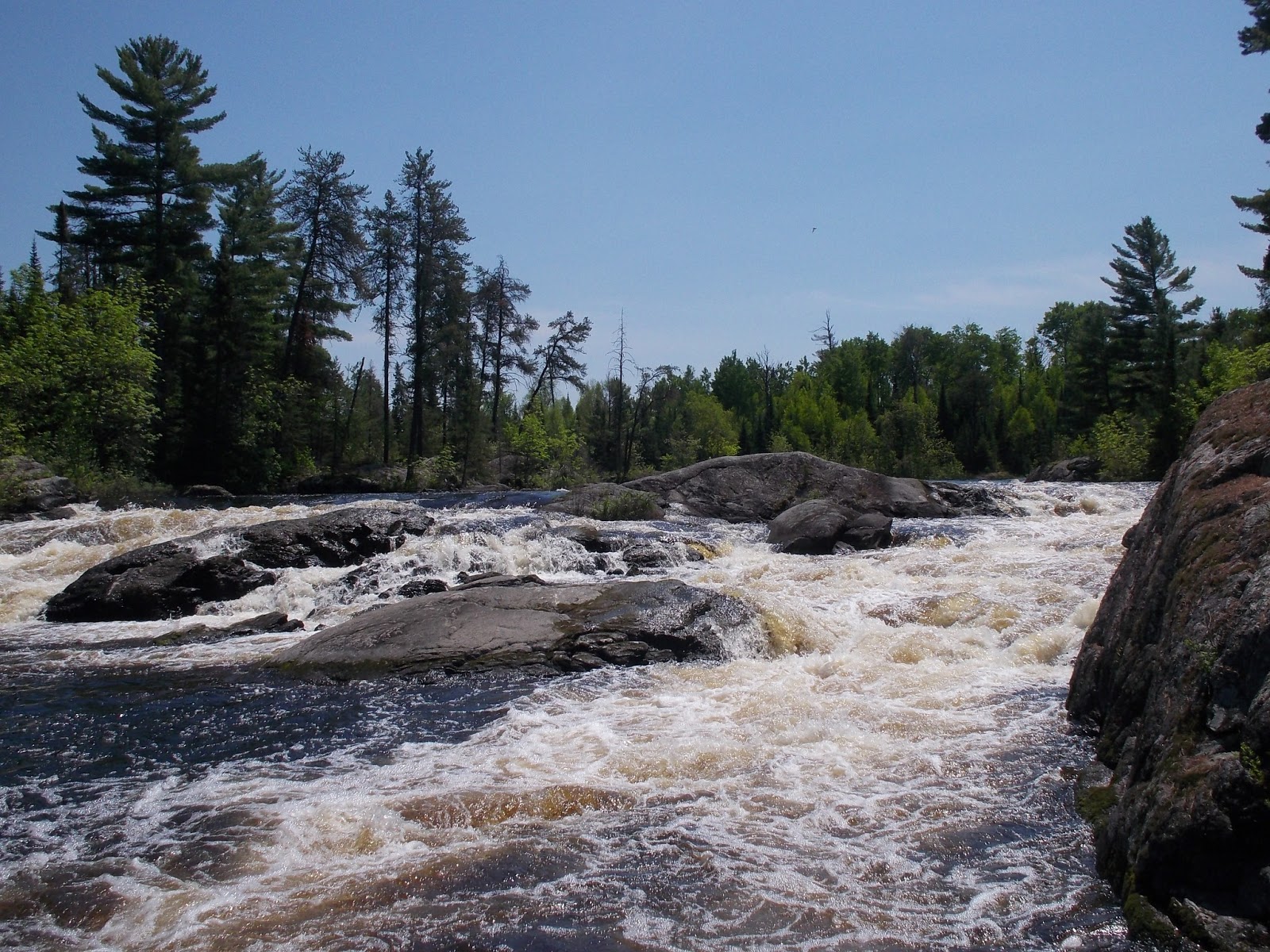 The other side of Lower Basswood Falls

The next day was also super fun, because we got to paddle down the Horse River. The Horse River has a whole bunch of rapids and waterfalls. We had to portage around most of them, but one of them we could walk through. It was fun, but I think I ate about 50 of the black flies that were spawning there. They were so thick and were all over the rocks. After the Horse River, we met up with the Basswood River and Wheelbarrow Falls. This is where things got interesting. There was a crew coming off of the portage across the falls from New Mexico who were on heir own trip through an outfitter and really didn't know how to paddle. These two scouts in a little Kevlar canoe take out across the bottom of the falls where there is a strong current and go straight perpendicular to the current. Soon afterwards they swamped. So I was in the stern of our lead boat and we paddled hard across the current to help the scouts out. Luckily the ended up in an eddy where there wasn't current and we were able to save their bags and tow them into shore. The key to paddling across the current is to try to keep the canoe pointed up the current. If you go straight into it, the current flips your canoe. Once we helped them across they checked all of their stuff and had only lost one paddle. Then we gave them advice on how to paddle across the rapids and they made it across alright. Once we got off of the rapids, we spent our last night on United States Point in Northern Basswood Lake.

The next day (our last day), we got some weather. We were going to get up early and do another dawn paddle to knock out he 20 miles we still had left to get to base, but when we got up, it was storming and there was lightning. We went back to bed and ended up leaving at around 7. We made really good time averaging about 4 miles per hour while paddling which is much faster than our first day. We arrived back on base and did check in the same way that we would with a crew. We finished off the night with rendezvous and a campfire where some staff put on skits and other activities. We were also given our staff patches (see picture below). They are pretty awesome. 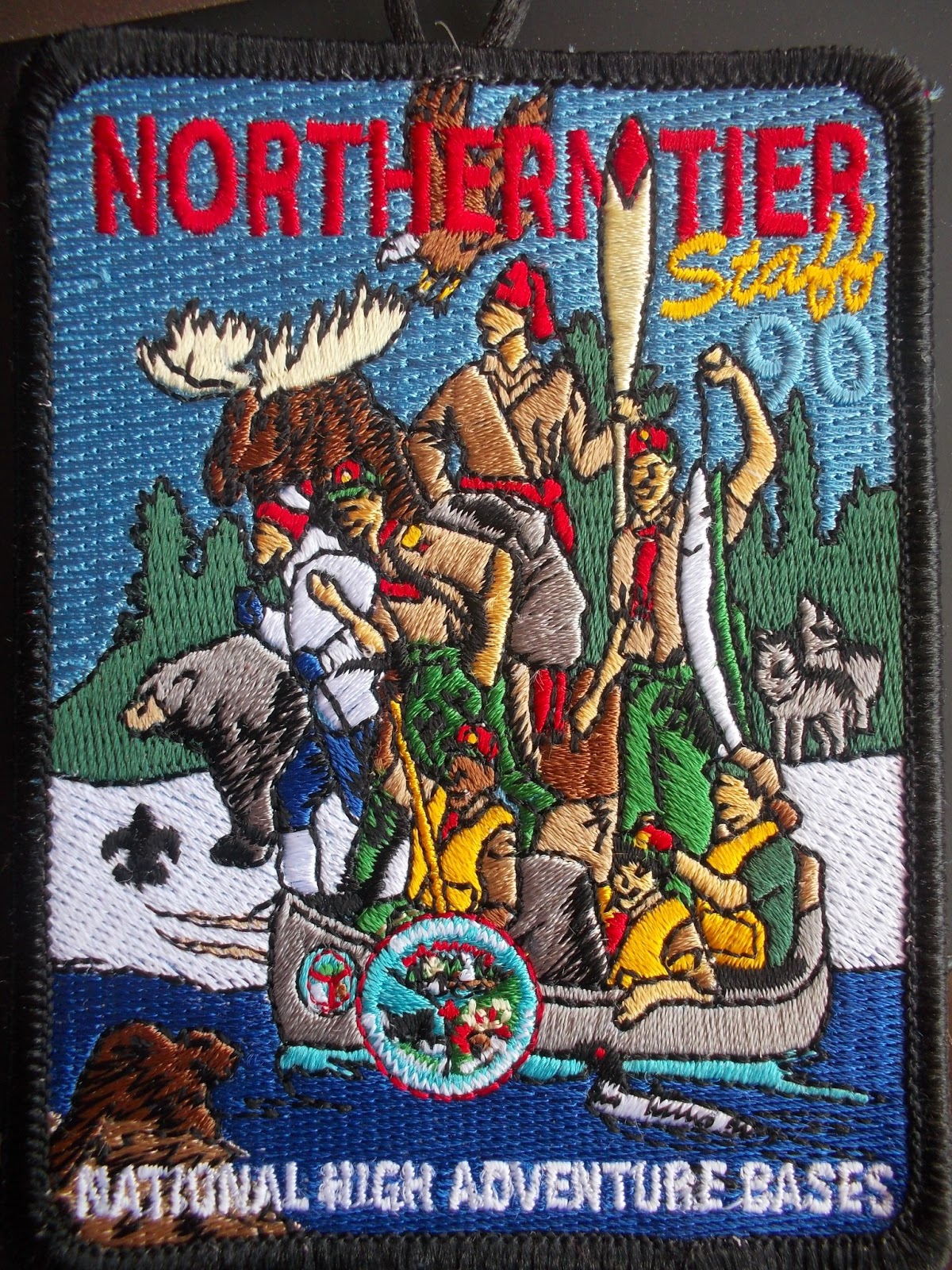 After getting settled back in I went back to check the schedule and realized that my first trip had been moved to tomorrow. I hitched a ride into town with some other staff and we are going to enjoy our day off before we get back to work tomorrow. I will continue to take tons of pictures and post as many as I can, but there will be plenty more when I get back. 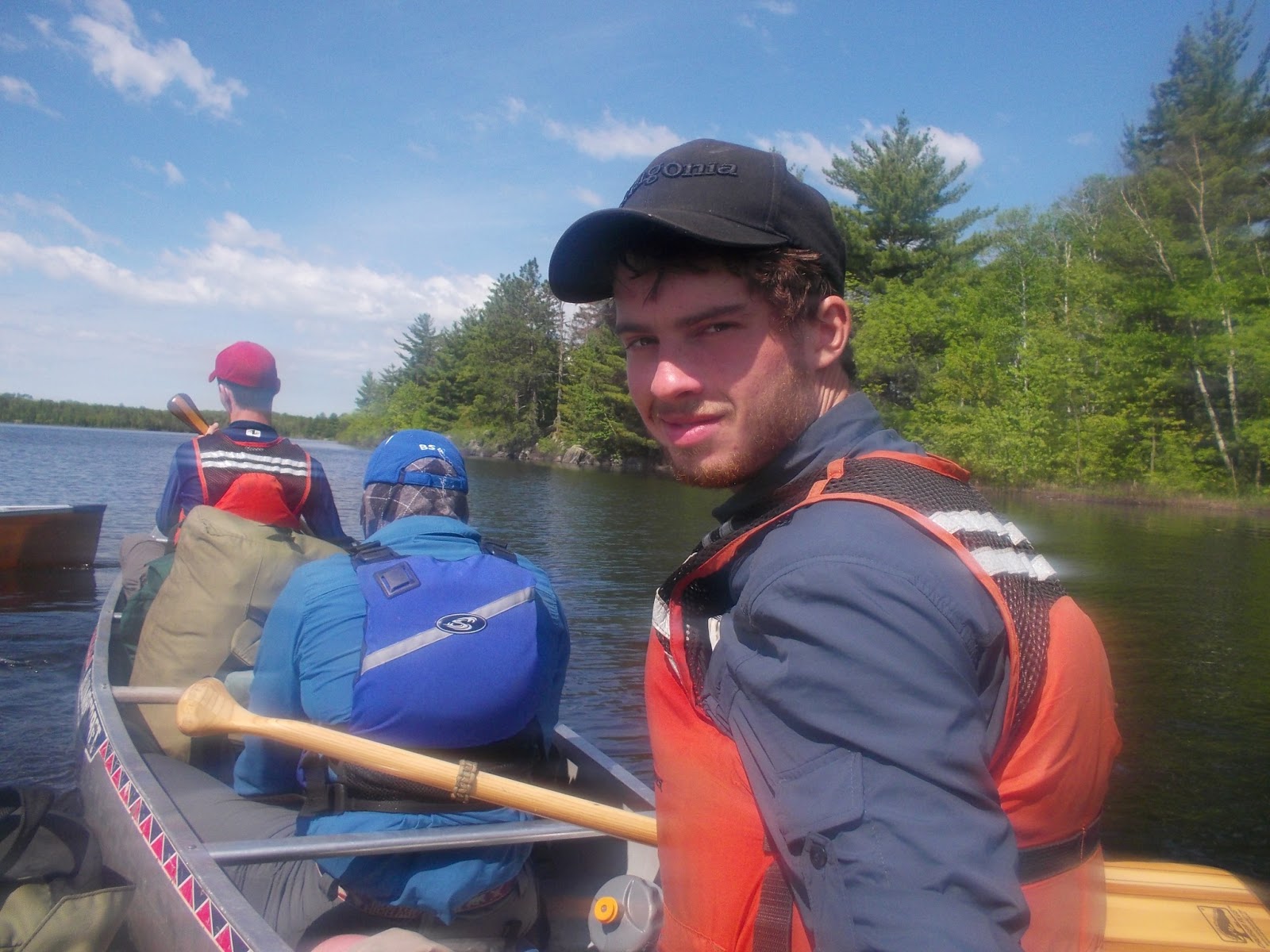 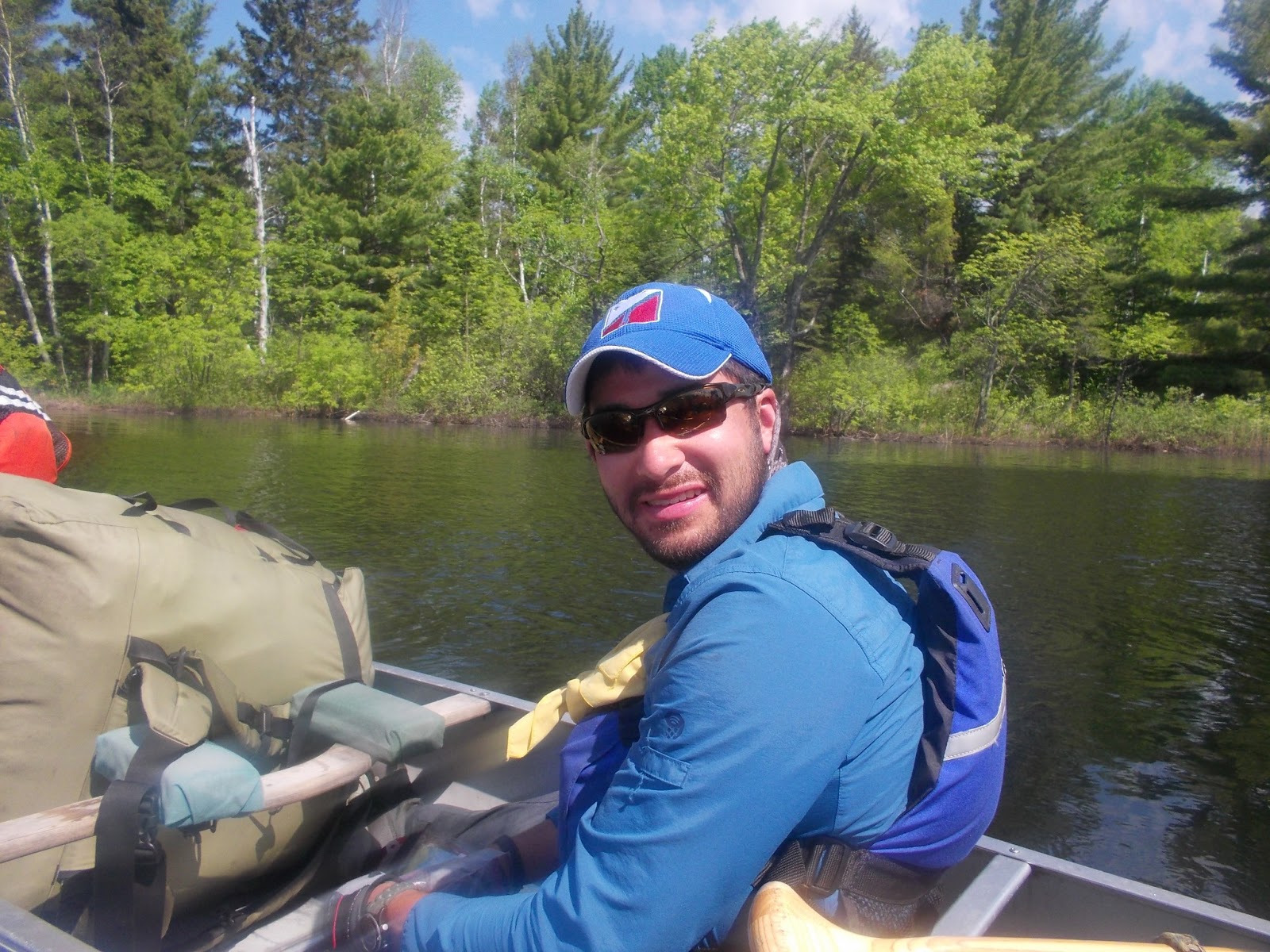 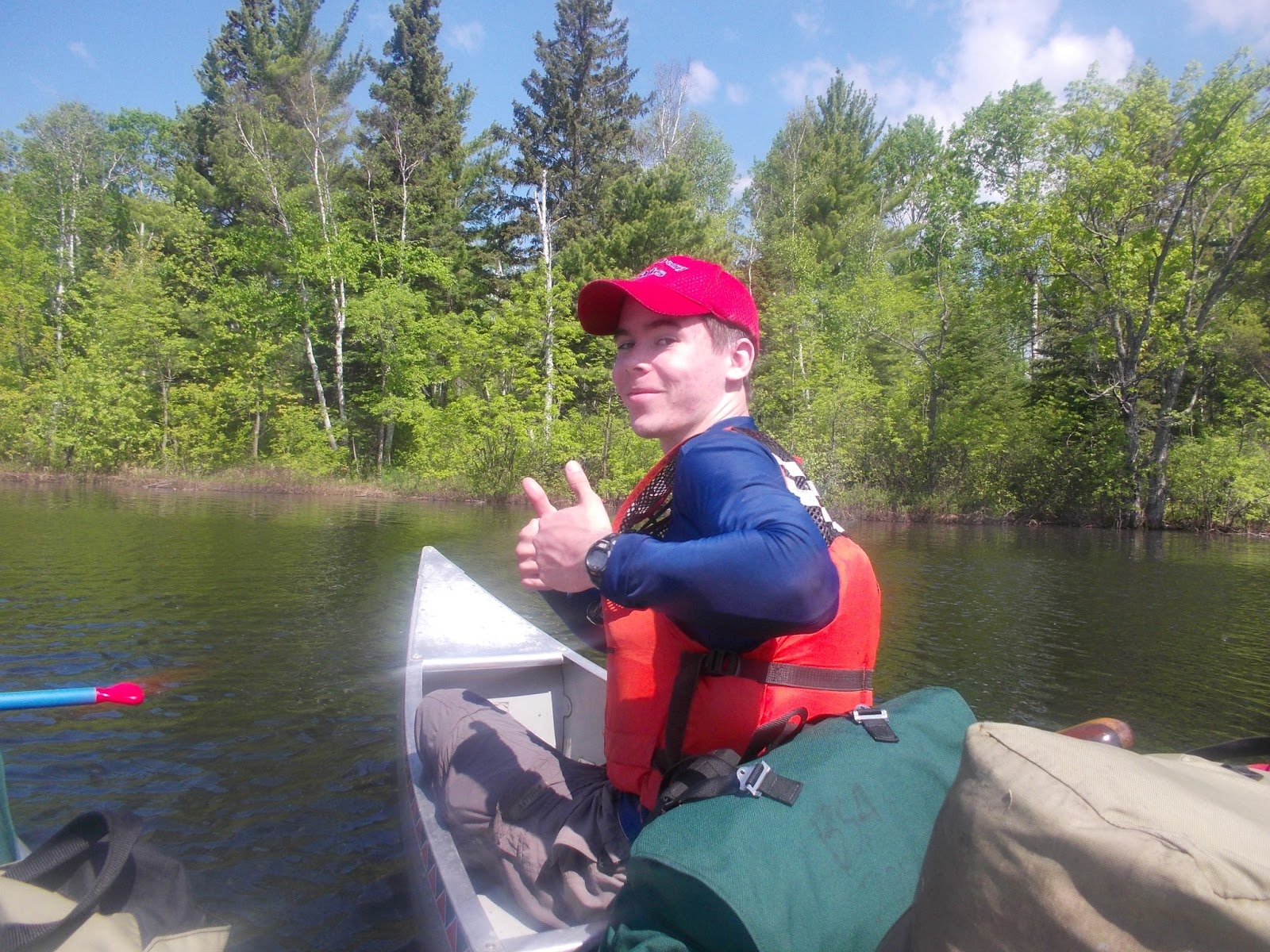 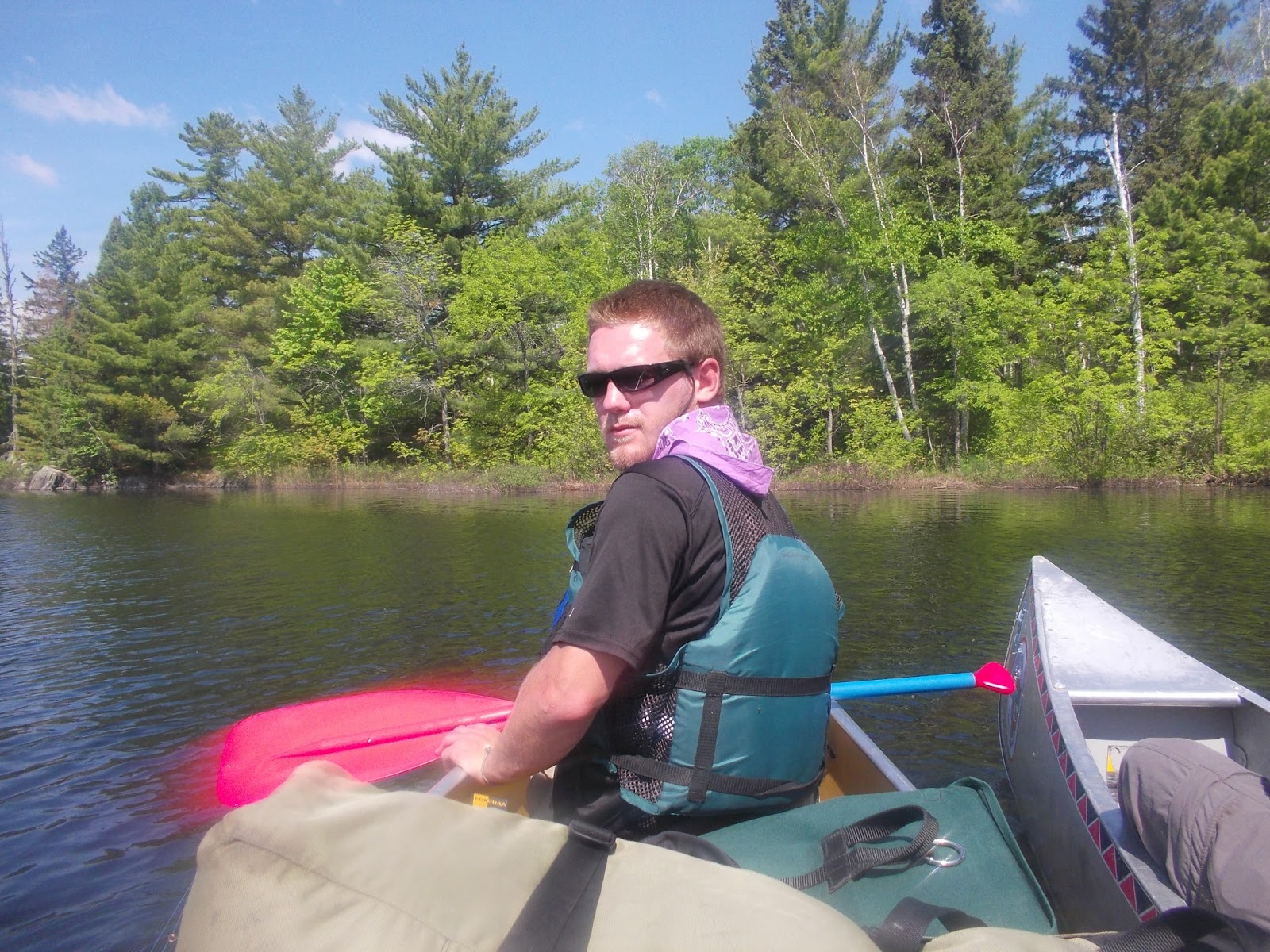 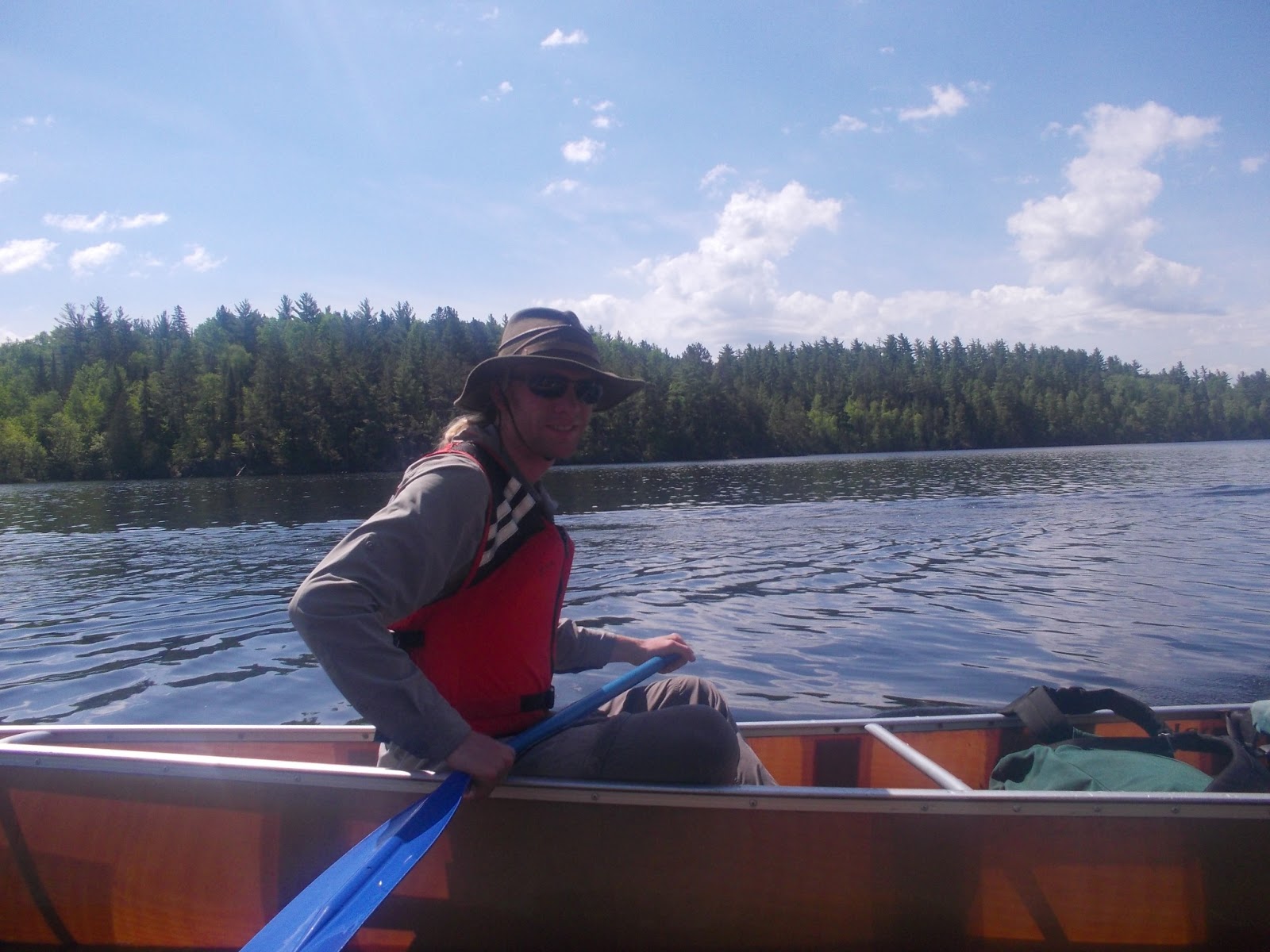 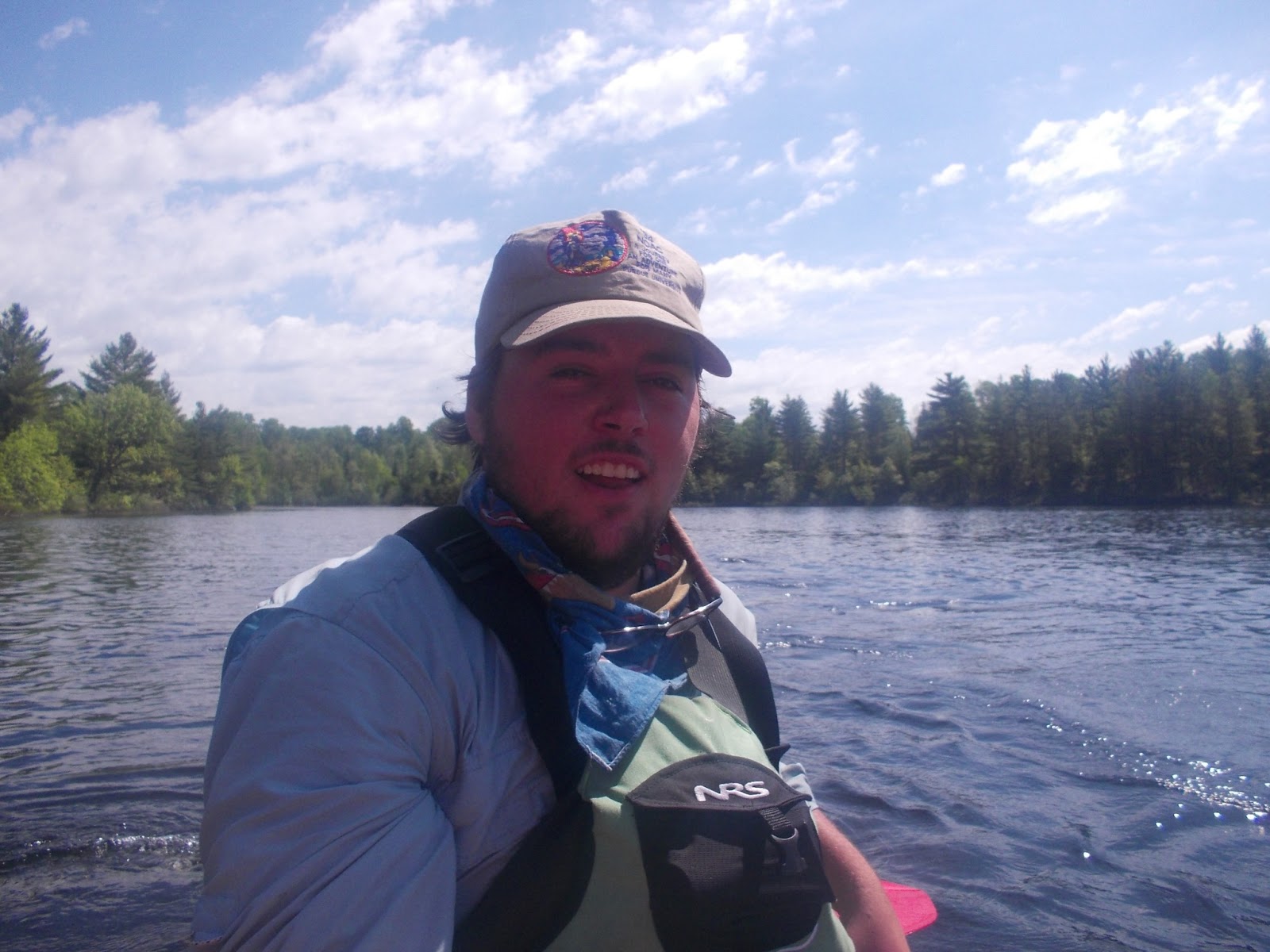 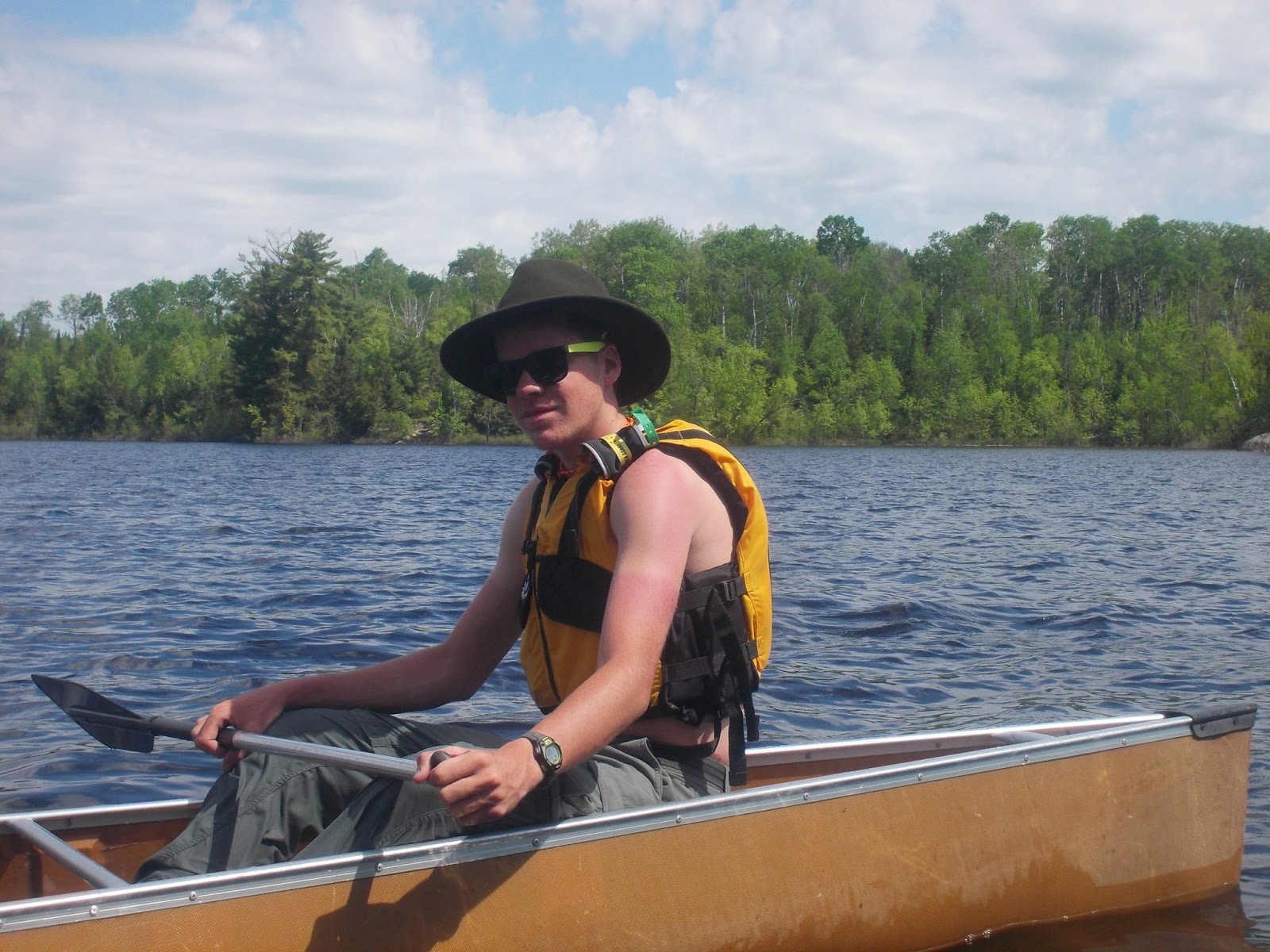 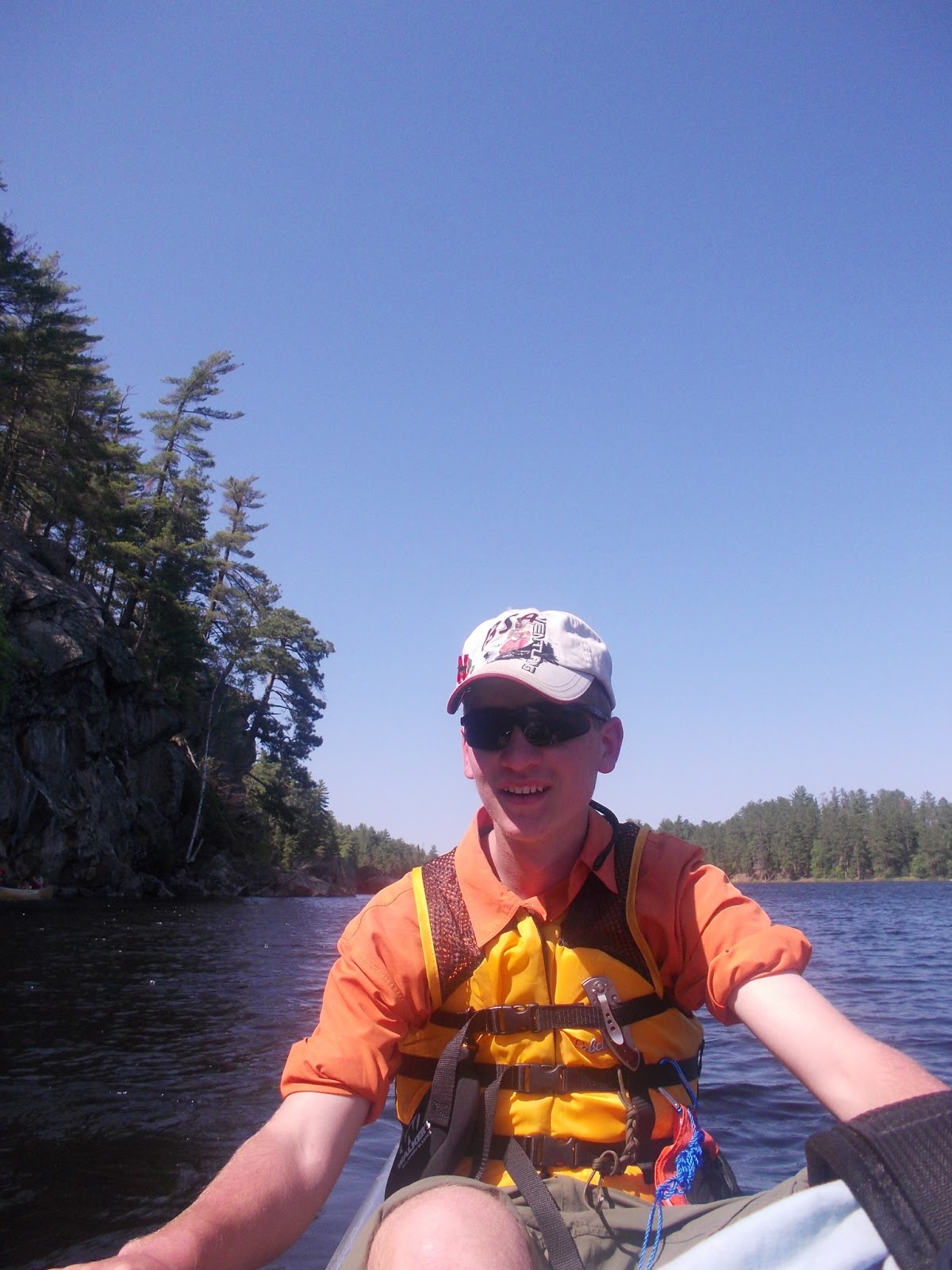